Hello and welcome! Today I am really excited to introduce you to a new video series I’m creating – 26 Words in Basic Strokes. For the next 26 days, 27 if you include this introduction, I will be breaking down one word a day into it’s basic modern calligraphy strokes.

I will be using a Fudenosuke small brush tip pen and a dot grid notebook with a smooth paper, you can use any tools you have to follow along. If you are a complete beginner I would suggest grabbing a pencil a B or a 2B and some lined paper.

Hello and welcome! I’m Riëtte and I’m excited to introduce you to a new video series I’m starting – 26 Words in Basic Strokes. Over the next 26 days, 27 if you include this introduction, I’ll be breaking down one word a day into the basic modern calligraphy strokes. I’ll be keeping it as simple as possible, meaning I won’t be using any flourishing or bouncing techniques, just the basic strokes.

The tools I’ll be using for these videos are the Fudenosuke small hard tip brush pen, and a dot grid notebook with a smooth paper.

You can use any brush pen and paper that you have to follow along. If you are a complete beginner I would suggest grabbing a pencil, a B or a 2B, I use a mechanical pencil with a B lead. I practice with pencil all the time. As for paper, any lined paper will work great.

As for your guides, you will need to make sure that you have a baseline, an x-height, an ascender line and a descender line. Depending on the pen you are using the space between the lines will change. For a small brush pen, like the Fudenosuke hard tip, a space of 8-10mm will work great. For a larger brush pen you’ll want to double it. If you are using a pencil the lines on lined paper, like an exam pad, will work perfect.

The notepad I’m using is a dot grid, meaning it has dots going across and down the page, I just leave a dot space between each line.

Now let me walk you through the basic strokes. In Modern Calligraphy it’s important to always remember, thin upstroke, thick downstroke. We have nine basic strokes that we use repeatedly in every letter of the alphabet. They are the upstroke, down stroke, up and down stroke, overturn stroke, underturn stroke, compound curve, oval, ascending stroke and descending stroke. Let me show you how to do each stroke.

Your upstroke will start at the baseline. Placing very little pressure on your pen move your pen up in a slight curve towards your x-height.

Your downstroke starts at the x-height. Using pressure pull your pen down to the baseline.

The Up and Downstroke

The up and downstroke is a combination of the upstroke and the downstroke. This straight downstroke is not really a basic stroke, as in not part of your letters, but it is really important to get used to before you move on to your overturn stroke.

The next stroke is your overturn stroke. Starting at the baseline and using light pressure pull your pen up toward your x-height. Before reaching the x-height turn to come back down to your baseline using pressure to get a thick downstroke. It’s important to keep both strokes parallel.

The compound curve is a combination of the overturn and the underturn stroke. Starting at the baseline and with very little pressure move your pen toward the x-height, curve back down as you reach the x-height and apply pressure on the downstroke curving back up and releasing pressure as you reach the baseline to create the final thin upstroke. Keep the space between the strokes as even as possible.

The next stroke is an oval. Starting off to the right and just below the x-height curve your pen up toward the x-height and with very little pressure. As you curve down apply pressure in a curve towards the baseline. When you reach the baseline release pressure and create a curve back up to connect where you started.

And there you go, these are all the basic strokes. As we go through the words you will notice some strokes that look unfamiliar, these are strokes that only get used in one or two letters in the alphabet.

Go practice the basic strokes, I’ll be back tomorrow with the first word.

I would love to see your practice words every day – tag me on Instagram using #26wordsinbasicstrokes.

I send out a monthly email with things that are happening in my creative world. Subscribers are awesome and also get access to my Freebies page where I add creative things every month.

Hello, I'm Riëtte, a quiet creative with odd ideas - wife to Alvin, mommy to three awesome kids and blessed child of God. I enjoy illustration, surface pattern design, lettering and calligraphy, paper crafts and crochet. Creating art and showing others how to do the things that I love makes me really happy. 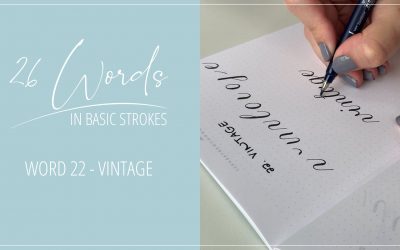 It's time for 26 Words in Basic Strokes, word number 22 today, vintage. Grab your pen/pencil and paper and practice with me. 26 Words in... 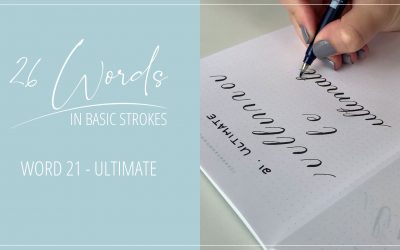 Welcome back to 26 Words in Basic Strokes - a video series where I'm breaking down one word a day for 26 days into the basic calligraphy... 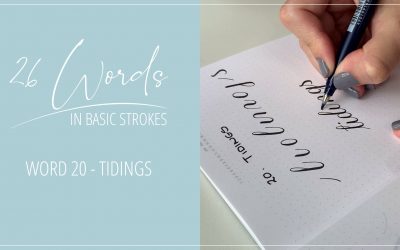 Time for 26 Words in Basic Strokes again. Word number 20 today, tidings. In case you stumbled upon this post and have no idea what I'm...